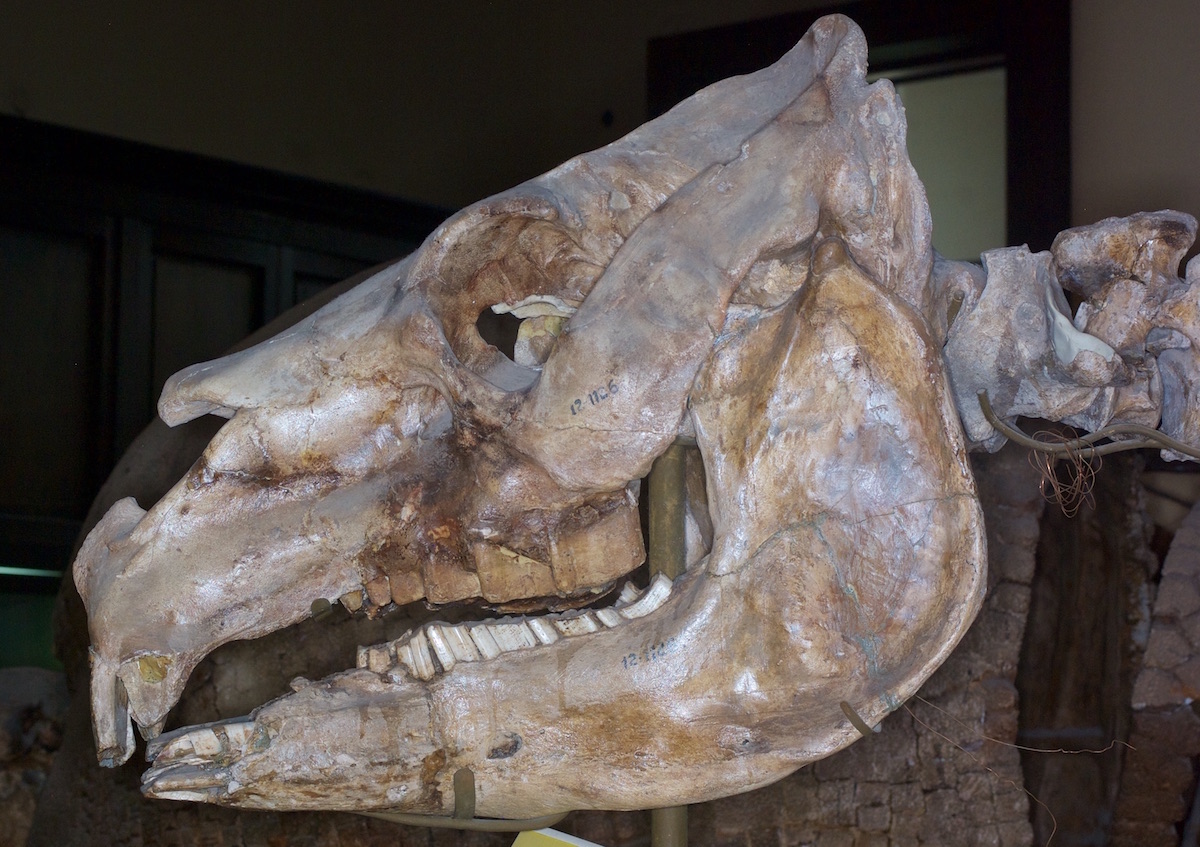 The other day, an Argentine friend and colleague of mine, Mariano Bond, used a characteristic phrase of his that is one of my favorites: “Los ungulados no mienten” or “the ungulates don’t lie.”

What Mariano was referring to when he said this is the fact that fossil ungulates are usually very reliable for determining the age of the rocks in which their remains are found. In South America, this is particularly the case for notoungulates, the most diverse and abundant group of native ungulates.

Why is this the case? Generally speaking, ungulates (hoofed mammals) are common (since they are herbivorous), widespread (since they are relatively large), and diverse (lots of species). As a result, they are found at most fossil sites. Moreover, sites that differ in age by only 2-3 million years (as indicated by radiometric dating) usually have different species of ungulates. As a result, identifying a fossil site’s ungulates usually provides a good idea of the site’s age. In other words, ungulates usually “tell the truth” about the age of a fossil site, whereas other groups can either lead one astray or simply provide no information at all.

It was with this phrase in mind that I read a recent paper by Ascanio Rincón and colleagues describing new fossils from the lower part of the Río Yuca Formation of Venezuela. The ages of these fossils are not constrained by radiometric dates on volcanic ashes, but recent geological models by Erikson et al. (2012) using a technique known as apatite fission-track dating have suggested the rocks were deposited during the late Miocene (perhaps around 10 million years ago). More than half a dozen species have been identified from the site, including some fishes, a turtle, a crocodile, and a handful of mammals, but most of these are quite fragmentary and cannot be identified precisely. Nevertheless, this study suggests that two mammal specimens might say something about age of the site.

One of these mammal specimens is a small piece of bone with two large pits in it. Rincón and colleagues identify it as an osteoderm (skin or armor bone) of a type of armadillo known as a peltephilid. Peltephilids (members of the family Peltephilidae) are very distinctive armadillos, perhaps the most distinctive of the group. Their claim to fame is that they sported a pair of “horns” on their snout. However, the bones of their armor (osteoderms) are nearly as characteristic. They tend to be square rather than rectangular as in other armadillos, most have a small, smooth area of overlap with an adjacent osteoderm, and they bear one or more pairs of large pits on their outer surface that housed hair follicles and/or glands when the animal was alive.

The specimen from Venezuela is not a great example of a peltephilid osteoderm – it is almost round and looks like it was transported by water and heavily abraded before it was preserved – but it resembles a peltephilid osteoderm more than anything else I can think of. If confirmed, this would be the northernmost occurrence of the group in South America, some 25° of latitude (well over 2,500 km or 1,500 miles) north of Salla, Bolivia (currently the northernmost record of the group). Since it is not possible to identify the species or even genus to which the specimen pertains, it cannot provide unequivocal information about the age of the site. Rincón et al. note that peltephilids are common during the late early Miocene, which is true, but this may have more to do with the abundance of sites of this age than anything else. Since no peltephilids are currently known to have survived beyond about 9 million years ago (the geologically youngest species comes from the site of Arroyo Chasicó in central Argentina), it suggests that the site is no younger than this in age. On the other hand, the specimen could simply represent the geologically youngest occurrence of peltephilids, as there are many examples of mammal groups that survived later in northern, more tropical areas of South America compared to more southerly, temperate ones.

The other mammal fossil from the Río Yuca Formation highlighted by Rincón et al. is a partial ungulate tooth. Specifically, it is part of an upper tooth of a medium-sized notoungulate. Like the peltephilid osteoderm, this specimen is tantalizingly incomplete. Although its base isn’t preserved, it is clear it was very hypsodont (high-crowned) or even ever-growing. This is indicated by its straight sides (low-crowned teeth tend to taper toward their base) and the presence of only a strip of enamel on its anterior face (this face is covered by enamel in low-crowned teeth).

The most interesting feature of the tooth is the long, narrow, enamel-lined fossette that runs diagonally across it and is visible on both the fresh and broken surfaces. Fossettes such as this are characteristic of geologically older notoungulates and those with lower-crowned teeth. The combination of a high-crowned tooth with a fossette such as this means it could only have come from a toxodontid, the family that includes the largest (sheep-sized to rhino-sized) notoungulates. The tooth is relatively small for a toxodontid, barely 2 cm (just over 3/4 “) in any dimension as preserved (not quite complete), which led the authors to suggest it is a molar of Adinotherium, a small-bodied species that lived between about 18 and 16 million years ago. On this basis, they suggest that this fossil from Venezuela could be of similar age. Another possibility they suggest is that this toxodontid survived later in low latitudes than it did elsewhere in South America.

But is this tooth really a molar of Adinotherium? I’m not convinced that it is. As can be seen in the images above, Adinotherium and its larger-bodied relative, Nesodon, have molars with a series of fossettes. These fossettes are gradually lost with wear, but the one that lasts longest is shaped like the letter Y, with two branches near its outer edge. I’ve never seen a molar from either of these toxodonts with a single long, narrow fossette like that in the Río Yuca specimen. When the main fossette is very worn, as in the first molar of Nesodon shown above, it is small and circular. However, the premolars of these toxodonts, as well as a few geologically younger ones, can bear a long, narrow fossette when worn. This can be seen clearly in both Adinotherium and Nesodon above. Since tooth size in toxodontids increases from the first premolar to the last molar, my guess it that this specimen is a premolar of a larger species rather than the molar of a smaller one. But even that poses a few difficulties, as premolars of toxodontids tend to be square, as in the photos above, rather than triangular, like the Río Yuca specimen.

So to what species does the specimen pertain? That I do not know. Having teeth with any fossettes at all is an ancestral characteristic for toxodontids that was lost in the vast majority of species some 15 million years ago. The upper teeth of most toxodontids simply have folds of enamel that extend inward from the lingual (tongue-side) of the tooth. Therefore, a tooth with this structure reminds me more of a geologically older toxodontid than a geologically younger one. But this could be another case of an evolutionary branch persisting longer in lower latitudes than at higher ones. A great example of this are leontiniid notoungulates: large relatives of toxodontids with low-crowned teeth that went extinct in Argentina some 20 million years ago but were still living in Colombia 12 million years ago. Without more complete remains from Rio Yuca, the identity of its toxodontid – and what the animal implies about the age of the site’s fossils – cannot be determined.

The ungulates don’t lie, but sometimes it is difficult to understand what they are saying.