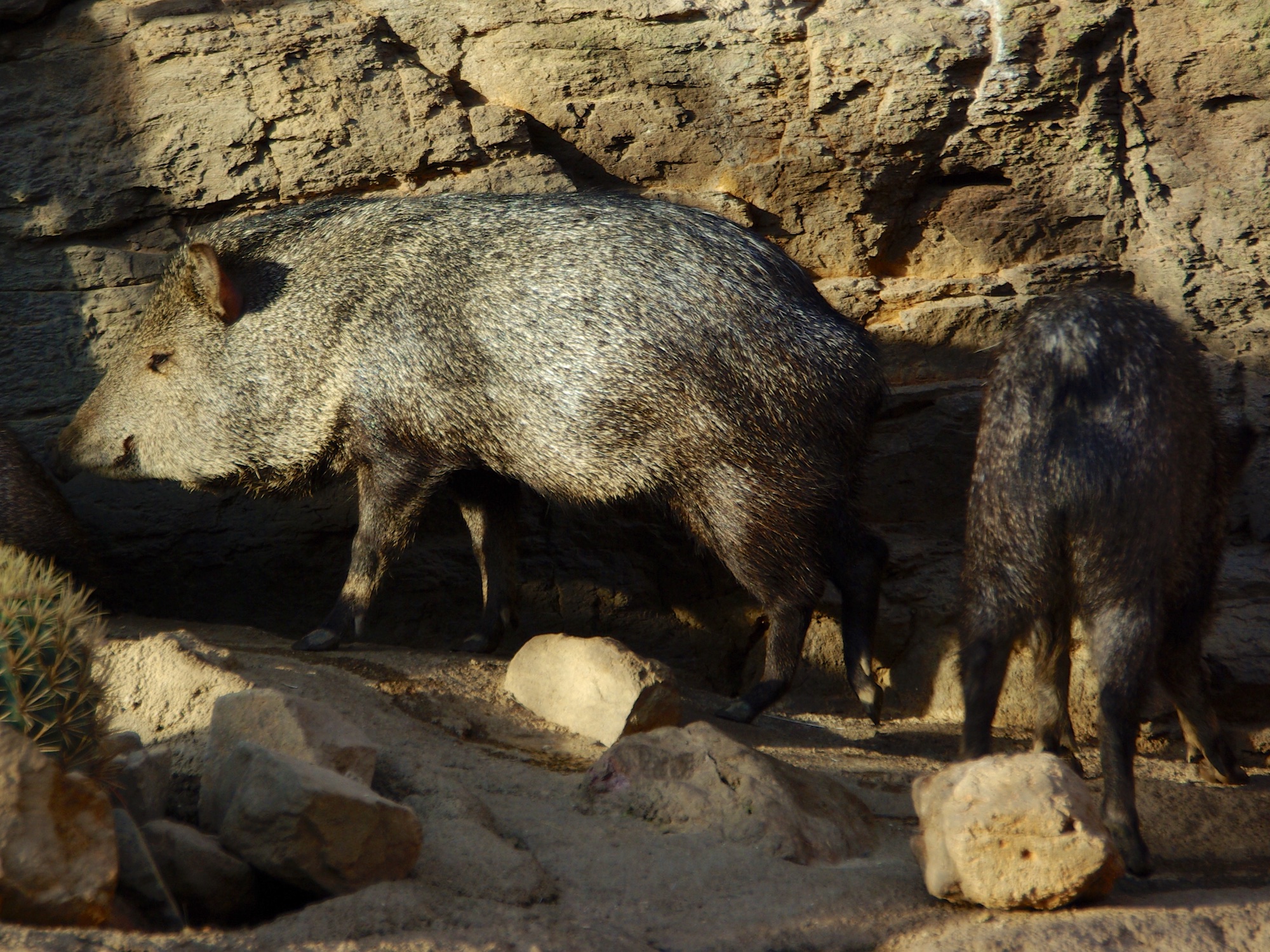 Peccaries are pretty neat mammals, but unless you happen to live in a region of the world they call home, you probably are not familiar with them. Peccaries are closely related to pigs and resemble them in overall form, but they have somewhat longer legs, deeper skulls, and their upper canine teeth point straight down rather than curve upwards. Peccaries also lack small side-toes on their hind feet that are present in pigs, and they tend to be herbivorous (plant-eating) rather than omnivorous (everything-eating).

The oldest undisputed peccary comes from the late Eocene of the western US, which indicates that pigs and peccaries diverged from one another more than 35 million years ago (Wright 1998). Peccaries have a long history in North America and were probably always restricted to the Western Hemisphere. A few fossils from the Old World have been referred to the peccary family (Tayassuidae), but they are fragmentary and seem to represent even earlier branches of the pig-peccary evolutionary tree (in which case they would technically be early-diverging suoids) (Orliac et al. 2011).

Peccaries were never very diverse, unlike many other groups of cloven-hoofed mammals, and three species survive today: the collared peccary, the white-lipped peccary, and the Chacoan peccary.

The collared peccary (Pecari tajacu) has the broadest distribution of the three species, ranging from the southern US through Central America and much of the northern two-thirds of South America, as far south as northwest Argentina. In the southwest US, they are known as javelinas (the “ja” pronounced like jalapeño, not javelin), and I remember the thrill of actually seeing one in the wild on a trip to Arizona more than a decade ago – though I am sure they are considered mundane (or even a nuisance) by locals, just as white-tailed deer are for us in the northeast. Collared peccaries occupy a broad range of habitats within this area, spanning deserts to tropical rain forests and covering most everything in between. Some evidence indicates that this species should actually be split into at least three (Groves and Grubb 2011).

The white-lipped peccary (Tayassu pecari) has a somewhat narrower distribution than the collared peccary, with a patchy distribution in Central America and a broad distribution throughout more tropical areas of South America. It looks a lot like a collared peccary but lacks the white stripe in the neck/shoulder region that gives that species its common name. Instead, it has a conspicuous white patch near its mouth and along its lower jaw.

The third extant species is the Chacoan peccary, Catagonus wagneri, which is larger, has more bristly hair, and lives in a large region of thorny scrub forest in central South America known as the Dry Chaco that covers eastern Bolivia, western Paraguay, and parts of northwest Argentina (Torres et al. 2017). Unlike collared and white-lipped peccaries, the Chacoan peccary is endangered due to its restricted range. It was also “discovered” by scientists a mere 40 years ago, undoubtedly due to its rather inhospitable (for many humans) habitat.

A mere 12,000 years ago, two other types of peccaries called the Americas home: Mylohyus and Platygonus, the latter commonly known as the flat-headed peccary. Unlike living peccaries, both of these extinct forms had broadly flaring zygomatic arches (“cheek bones”) more similar to some Old World pigs such as warthogs and giant, extinct pig-like animals known as entelodonts than living peccaries. Mylohyus has not been recorded from South America, but the flat-headed peccary ranged throughout much of the continent, even further south than the modern collared peccary (just beyond Buenos Aires, Argentina).

Although South America is home to all three extant species of peccary as well as several extinct ones, this group is relatively new to the continent compared to endemic ungulates like notoungulates and litopterns. It is clear that peccaries did not originate in South America. Rather, they were among the mammals that participated in the Great American Biotic Interchange (GABI), most likely walking from North America to South America millions of years ago via the Isthmus of Panama or some isthmus-like precursor to it. But when, exactly, did they arrive? That is much less clear.

The oldest securely dated peccary remains in South America come from Buenos Aires Province in Argentina and are about 4 million years old (Gasparini and Ubilla 2011; Cione et al. 2015). That means that peccaries must have dispersed to the continent sometime before then. On this point, all paleomammalogists agree. Opinions diverge when it comes to peccary fossils that have been collected from several areas of western Amazonia. These specimens were originally thought to be a few thousand years old, and many were identified as pertaining to the living collared peccary (Simpson and Paula Couto 1981). These specimens were reinterpreted more recently as being much older, some 9 million years old, and pertaining to two new species (Frailey and Campbell 2012). These highly divergent interpretations primarily result from contrasting ideas about the age of these fossils, as the rocks in which they were found have not been dated directly. If these Amazonian species really are 9 million years old, peccaries dispersed to South America much earlier than previously believed. If not, there no fossil evidence that they arrived much before 4 million years ago.

Earlier this year, an analysis of peccary DNA was published that provides some additional insights into peccary evolution and dispersal. What makes the study particularly interesting is that the authors included DNA from extinct flat-headed peccaries – extracted from well-preserved fossils from Sheridan Cave in northwest Ohio – as well as DNA from all three types of living peccaries. They found that the three types of living peccaries are each others’ closest relatives and that the white-lipped and Chacoan peccary are most closely related to one another among the three. The flat-headed peccary represents an earlier branch of the peccary evolutionary tree that diverged before any of the modern species.

What does this pattern of evolutionary relationships indicate about peccary evolution and dispersal in the Americas? Perhaps the most important conclusion that can be drawn from the study is that the flat-headed peccary must have dispersed to South America separately from other peccaries. Some authorities had speculated that the flat-headed peccary was closely related to the Chacoan peccary and could have given rise to that species in South America, but that is certainly not the case.

From there, things are a bit murky, as three scenarios for peccary evolution fit with the molecular data.

Regardless of the exact scenario, there seem to have been at least four dispersals between the two continents during the GABI.

Is there any way to discriminate among these possibilities? Yes, if it can be determined when, exactly, these divergences and dispersals took place. Unfortunately, that is not so straightforward.

Using a “molecular clock” approach (i.e., estimating how long lineages have been evolving independently based on differences in their DNA sequences), Perry et al. (2017) estimated that living peccaries began to diverge from one another sometime between 26 and 10 million years ago, and that white-lipped and Chacoan peccaries diverged between 14 and 4 million years ago. Thus, if the common ancestor of all three existed in South America (Scenario 1), it must have gotten there more than 10 million years ago. This fits well with the presumed late Miocene age of the Amazonian fossil peccaries mentioned above as well as the idea that they represent early relatives of both the white-lipped and collared peccary lineages. However, it means that peccaries were somehow able to get to South America long before the appearance of the Panamanian Isthmus – though the age of that structure is also a topic of considerable debate. More importantly, it implies that: (1) peccaries were restricted to Amazonia for at least 5 million years before they expanded their range to other parts of the continent; or (2) peccaries were living elsewhere during that interval and simply left no fossil record. Either situation is possible, but both seem unlikely.

Right now, I’m putting my money on Scenario 3, which fits the best with the known fossil record of the group in South America: the earliest, well-dated fossils pertain to flat-headed peccaries, and fossils of more modern lineages are not recorded before the Pleistocene. Time will tell whether or not I am correct.

Until then, the take-home message is this: the 18 or so families of terrestrial mammals that dispersed from North to South America during the GABI are not simply the result of 18 unidirectional dispersal events. Their evolutionary and biogeographic histories were much more complex, and we are just beginning to figure out the details.